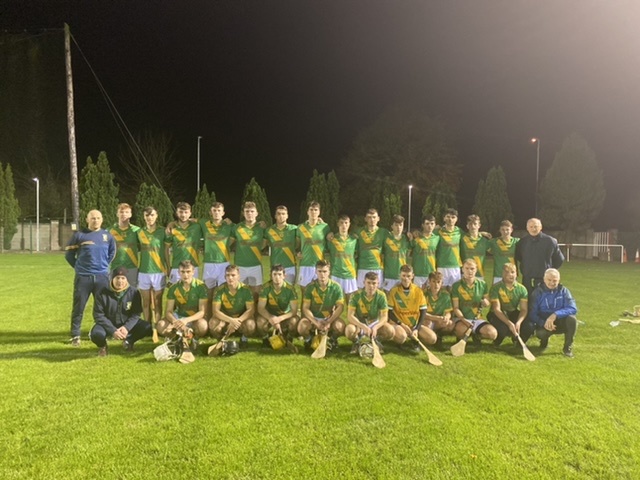 Ahane headed to Doon to play Garryspillane on Tuesday evening in the second round of the U21 Championship. There was a seriously strong breeze that favoured Garryspillane in the first half which was reflected in the half time score as Garryspillane were up five points. Ahane’s first scores came from Mark Donnellan and Peter Donohoe who got on the end of a well-controlled ball from Kevin Morrissey to pull on the ball first time and slot it home meaning Ahane were only one point behind after nine minutes. Ronan Fox, who put in a man of the match worthy performance levelled the scores, but this didn’t last long as Garryspillane responded well with a point of their own. On several occasions Garryspillane tried to get in on goal but serious credit is due to our hard-working defenders and William in goal who dealt with the pressure well. Ronan got another point to level matters again before Garryspillane got a point and the score at the water break was Ahane 1-03 Garryspillane 0-07. Garryspillane got 1-01 in the opening minutes of the second quarter, as what could have been an Ahane goal down one end, was cleared well and Garryspillane made their move up the field leaving our defence and William with no chance of stopping the ball. In a great response to the goal, Ahane got a Peter Donohoe point and then after a lovely ball in from Conor Heffernan Kevin Morrissey slotted over a lovely point. Not a minute later and the ball from the Garryspillane puck out looked like it was going to go out over the side-line but somehow Ronan Fox controlled it in the air like a wizard, brought it down and then finished the move with a score, most definitely a contender for, if not the best score of the evening. The next three scores were all Garryspillane as they widened the gap back to five points, before Ronan brought it back to four with another serious point. At half time the score board read Ahane 1-07 Garryspillane 1-12. The wind died down a small bit in the second half, but Ahane got the first three scores all from placed balls taken by Ronan. The first one was at the left-hand side of the pitch, the second one was at the right-hand side of the pitch and the third one was from straight in front of goal with all three frees a good distance out. William was called into action again in goal and made another fine save to deny Garryspillane a sure goal. He was back in action again not three minutes later where he managed to get a touch to the ball and guided it over the bar. The second half water break score was Ahane 1-10 Garryspillane 1-15. The gap was brought back to four with another great score from Ronan. Padraig Hartnett showed he’s not just a top-class defender, but he can score too as he popped over a well taken free. Padraig at centre back, Aidan Carroll at full back and Evan O’Leary at corner back all had super games and if we were giving out man of the match awards, they would be in contention for it! Garryspillane got their second goal which was the killer blow in the 26th minute. A very well struck ball that gave the Ahane lads no chance of saving it. Garryspillane got two more points before Peter O’Grady steadied the Ahane ship with a point bringing the gap to eight. Andrew Shanahan added another point to bring it to seven and Peter Donohoe was clear in on goal but a seriously well-timed hook denied him. Unfortunately for the Ahane lads, they ran out of time and the final score was Ahane 1-14 Garryspillane 2-18. Ahane now play Patrickswell on Friday in Caherdavin.