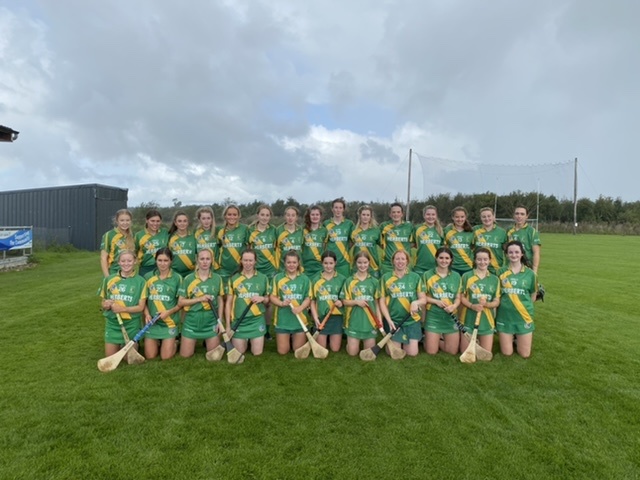 Ahane travelled to Killeedy on Sunday morning to take Killeedy on in the Senior County Semi Final. Weather conditions were horrendous from start to finish as the rain poured and a fierce wind blew throughout the game. Killeedy were off the mark first and had scored 1-04 in the first fifteen minutes with no response from Ahane. At the water break the score was Ahane 0-00 Killeedy 1-04. Ahane started the second quarter with more fire and started to get some scores. Éle Madigan got Ahane’s first score after savage work rate out the field. With conditions worsening players were slipping and sliding all over the place and the ball wasn’t travelling any distance against the wind. Judith got Ahane’s next score from a free, before Noreen put pressure on the Killeedy keeper, managed to block her down and the ball flew over the bar from the block down. The final point of the half was from Killeedy. The half time score was Ahane 0-03 Killeedy 1-06. Ahane’s moment of magic came in the 11th minute of the second half as Shauna Darcy got on the end of a lovely ball in from Judith, pulled on it first time and got the all-important goal! The Ahane joy was short lived though as Killeedy came back down the field and scored a point and then got a goal. The score at the second water break was Ahane 1-03 Killeedy 2-07. Killeedy were first to score after the water break and it was a goal. They got another point before Judith popped over a placed ball for Ahane. Killeedy went down the field again and dealt the killer blow as they scored their fourth goal. The final score of the game was a point from Killeedy. Huge credit to the Ahane side who fought throughout and never gave up. Full time score Ahane 1-04 Killeedy 4-09

We are so proud of these girls and the effort they have put in over the year. From starting the year on Zoom, to winning the Senior League and getting to the Co Semi Final, they have shown great dedication, hard work and talent throughout. Huge thank you to everyone who has been involved with the team this year, Jim Hackett, Michael McNamara, Emer Kenny, Tony Kenny, Eugene Ryan, Kevin Donnellan, Phelim Macken and Anne Madigan. Thanks also to Toni Macken and Mary Cusack who did first aid throughout the year and kept the girls in once piece. Thank you to our kitman man Mark Darcy, and to Deirdre Herbert and Mary Kennedy for providing refreshments after training and also a huge thank you to all our supporters who have travelled to the games and cheered the girls on this year! Finally, thank you to the panel of girls who have done the club so proud and are a credit to themselves. They have put their heart and soul into this year.