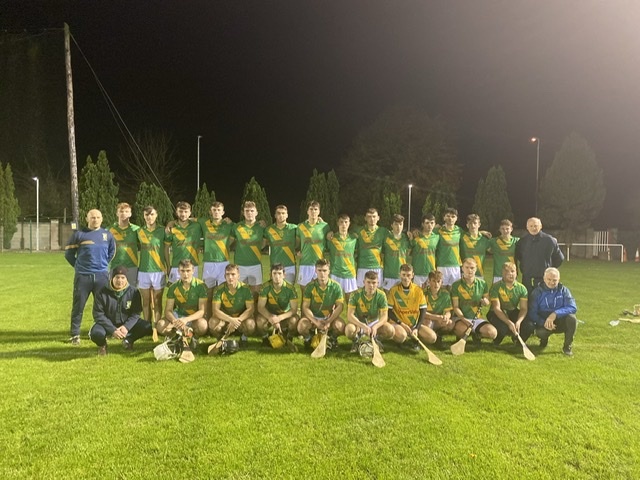 We travelled to UL to take on Mungret St Pauls in the U21c Premier County Hurling Championship. After a delay the game got underway at 9:15pm and it was Mungret that got the first two points before Evan Power scored a beauty from out near the side-line. The first of Mungret’s goals came in the seventh minute as Mungret went 1-02 to 0-01 ahead. Peter O’Grady responded with a point to keep us ticking over. Our next point came from a move started by Ronan Fox, who passed it to Jack Barry, who made the final pass to Kevin Morrissey who fired it over the bar. Mungret continued to put serious pressure on us all over the field and despite our best efforts they scored their second goal in the twelfth minute to add to the point they scored from a 65 just before hand. Ronan got the following two scores from frees and the gap was down to five. Mungret scored a point before the water break to leave the game standing as Ahane 0-05 Mungret St Pauls 2-05. Kevin Morrissey scored the first point after the water break, but Mungret scored 1-01 in quick succession. We played some good hurling in parts and put some good moves together. Ronan scored another free, before Mungret got their seventh point. Kevin made a quick response though and got a point for us so the gap as eight points. The absolute killer blow came just before half time as Mungret scored two goals to put their goal count as five. Ronan converted another free, but Mungret had the last say in the half as they scored a point. Half time score Ahane 0-09 Mungret St Pauls 5-08. First two points in the second half were for Mungret from placed balls. Ronan got another free and then got on a ball from Mark Donnellan who did well to dispossess the Mungret player and lay it off to Ronan to get the point. Two more Mungret points put them up seventeen points, but Ronan and Andrew Shanahan got great points from play to bring it back to fifteen. Kevin Morrissey got a point after serious teamwork out the field, Ronan slotted a free over the bar before Mungret got a point straight away. Liam O’Mara had a shot on goal, but it was saved by the Mungret keeper much to the disappointment of the Ahane crowd. Ronan hit another beauty of a free, but Mungret kept their scores ticking over too meaning the gap was sixteen points in the twenty-eight minute. Mark Donnellan scored a point from play before the full-time whistle was blown. Full time score Ahane 0-17 Mungret St Pauls 5-17. The goals absolutely killed us, and the final score did not reflect the effort and the work rate of our lads. Huge thank you their management team of Eammon Meskell, Johnny Meskell, and Denis Murrihy for all their work with the lads throughout the year. Thank you to Brian O’Mara for doing first aid and to Rory O’Donnell and Jack Murray for providing physio all year. Finally, thanks to the lads for all their effort this year, although it didn’t go the way we had hoped there is serious talent in this group, and they never gave up.

Reminder that the MyLife Every Step Counts Challenge star...

We are taking part in the MyLife Every Step Counts Challe...

In light of the current COVID situation both nationally a...

A Christmas Message and Video (can be found on our Facebo...

Our online donation link has just gone live! 🙌🏻🥳You can m...