U21 B County Football Championship Round 2 Match Report 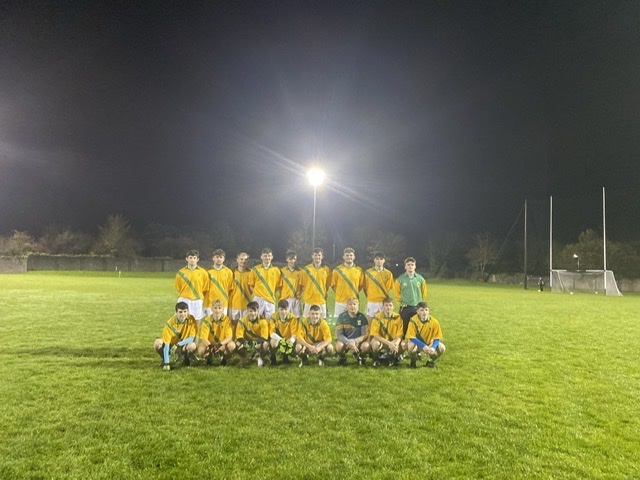 On a crisp Sunday morning we welcomed St Patricks to Mackey Park. Hoping to build on our performance from our opening game we got our first score curtesy of Evan Power. Padraig Harnett put us two one up after Liam O’Mara did great work to get the ball to Paudie. Andrew Shanahan took a 45’ which dropped in but serious reflexes from the St Pats goalkeeper meant we didn’t get the goal and instead Andy stepped over another 45’ which just tailed wide. Three minutes later Aidan Carroll attempted to punch the ball over the bar, but somehow the St Pats keeper got a hand to it, saved the rebound shot from Evan and then saved the shot from Gavin and managed to clear the ball. Shane O’Grady dispossessed the St Pats player, Mark Donnellan got on the breaking ball and fired it over the bar to get our third point. St Pats got their first goal of the game in the fourteenth minute and then added a point from a free. The score at the water break was Ahane 0-03 St Patricks 1-02. We got our first goal in the twentieth minute, and it was from the boot of Padraig Harnett as he started the move from wing back and then passed it off to Mark Donnellan who passed it back to Paudie, and he buried it into the net. Paudie scored our next point and added to his tally for the day, bringing it to 1-02 from wing back! Half time the score was Ahane 1-04 St Patricks 1-02. We played some great football in the first half and worked well for each other. The second half got underway and again we were denied a goal this time by the posts and then St Pats came down the field and scored their second goal. They added a point before Mark Donnellan scored a much-needed point for us. The score at the water break was Ahane 1-05 St Patricks 2-04. St Pats scored two points on the bounce before we put a great move together and took the shot on goal but serious credit again to the St Pats keeper who saved the initial shot and then the shot after his first save. Peter Donohoe then got on the ball, did everything right but again somehow, we were denied another goal. We could have scored at least six goals over the sixty minutes, but it just wasn’t to be for us. St Pats got the final score of the game from a free. The final score was Ahane 1-05 St Patricks 2-09. We played some good football and got good scores but the wides and the frees killed us. The St Pats goalkeeper was also unbelievable throughout the game.

Ahane u13s through to championship semi-final

What a weekend, what a team and what a performance to win...

3 in a row commemorative number plates!

TO ALL OUR LOYAL SUPPORTERS.   Our Official commemorative...

Another successful Cúl Camp in Ahane

The hugely popular Ahane Cúl Camp is up and running. 220 ...

PILATES CLASS EVERY MONDAY 7PMPAY AS YOU GO FOR THE MONTH...